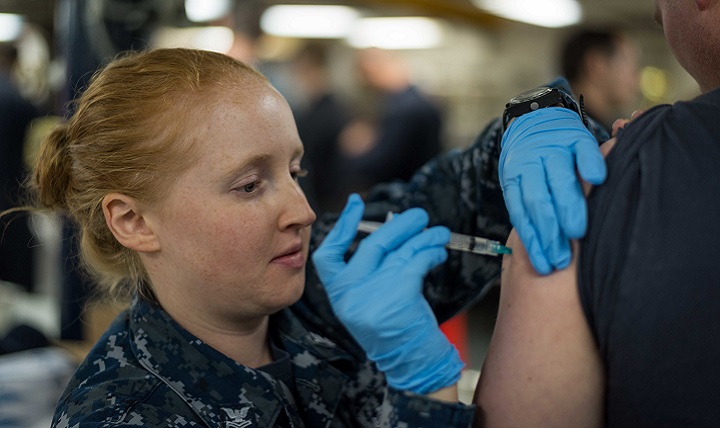 The number of diagnosed cases of the flu has risen during the past four years just as the number of vaccinations continues a downward trend, states an analysis by Perception Health, a healthcare data intelligence company in Nashville, Tennessee.

These two trends place an increasing number of Americans at risk of developing the flu, especially high-risk patients with weakened immune systems like children under the age of two and adults 65 and older.

The key to preventing the flu this year is getting a flu shot as soon as possible.

“It’s important to get vaccinated early, before the flu season really hits our communities,” says Tod Fetherling, CEO of Perception Health. “Some providers are even offering free vaccinations, so we recommend getting it done as soon as you can,” says Fetherling.

Analyzing the information in more than 10 million de-identified medical claims, the data scientists atPerception Health tracked the number of flu cases over the past four years. The2016-2017 flu season saw a 33% increase in diagnoses over the previous year, and the 2017-2018 season saw an even higher rate of diagnosed cases with an increase of 45%.

While the volume of cases dropped slightly during the 2018-2019 season, the overall number of diagnosed cases continued to trend upward (see below). 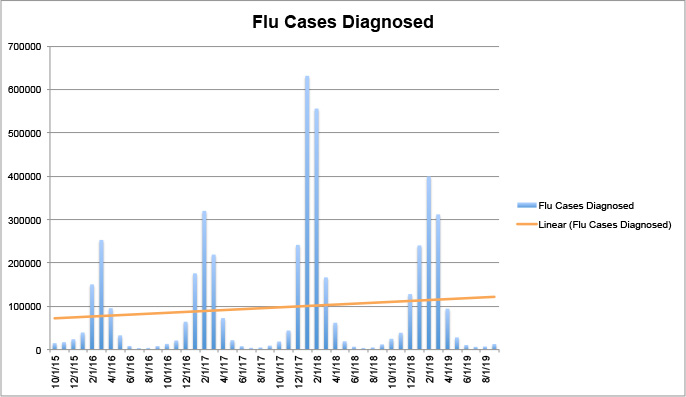 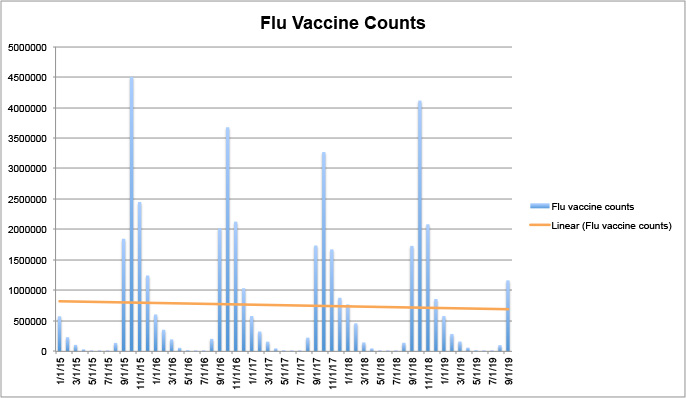 Reports released last year by the Centers for Disease Control and Prevention stated that fewer than4 in 10 adults in the U.S. got shots during the 2017-2018 flu season, the lowest rate in seven seasons. This was a contributing factor in why the 2017-2018 season was the deadliest season in decades.

The CDC explains that every flu season is different and the flu can affect people differently. Still, the agency reports, “millions of people get the flu every year, hundreds of thousands are hospitalized, and tens of thousands of people die from flu-related causes every year.”

An annual seasonal flu vaccine is still the best way to protect against the flu. Two weeks after vaccination, one’s body develops antibodies that provide protection against infection from the most common strains of the flu during the upcoming season.

Vaccination counts traditionally peak in October, which is the month that the CDC recommends forgetting a flu vaccine. The CDC and other organizations also sponsor National Influenza Vaccination Week the first full week in December.

The timing of this health observance is critical to increasing awareness of the vaccine before cases of the flu reach its zenith, usually in February. As the chart below shows, the peak month for flu cases has been inching earlier in the year, though last year saw a later peak than normal.

By increasing the number of vaccinations every season, especially in September and October, more people will be protected against the disease and won’t be a carrier to others. This one task can keep you healthy and help protect your family, neighbors, and co-workers from contracting the disease.

For a list of locations that offer the flu vaccine in your area, go to VaccineFinder.org and enter your zip code.